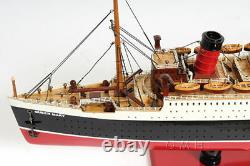 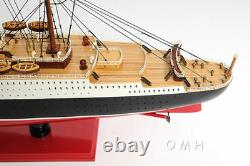 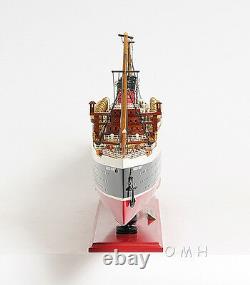 Day of September 1936 it was a rainy day. The gathering was crowned by the royal family standing on a special designed platform with a glass-screen to prevent the royalties from getting soaked. The river had had to be further dragged to receive the 1,018-feet hull. But there were no damages and the fitting out could commence.

Supposed to be a rival to the French Normandie, the Queen Mary could not compete in modernity and sleekness. She represented the British conservatism, and one could say that she was a larger replica of the 1914-built Aquitania. But in size the Queen Mary seemed to overshadow the Normandie. At 81,000 tons, the Queen exceeded.

If the Normandie had entered service after the Queen Mary, the Queen would possibly have been talked about as the most beautiful liner ever built - inside and out. But now it was the contrary. The British combination of traditionalism and modernity was considered too sterile by the some critics of the 1930. Her interiors had over fifty different woods, collected from all over the British Empire.

Around the vessel nautical touches were displayed and the round portholes were proudly exposed. The first class lounge was a two deck high creation with little groups of tables and chairs cosily put together around fireplaces and in the room's corners. The long tables of the old ocean liners had been long gone, and just as in the lounge the tables were grouped with two to four chairs a each.

For larger companies bigger tables were naturally available. On the short-side wall a giant map of the Atlantic was mounted. It showed the exact position of the Queen Mary during a transatlantic voyage. When Queen Elizabeth entered service after the war, you could see the position of the sister-vessel as well, and thereby knowing when they would meet on the Atlantic. The first class accommodations were vast with plenty of elbow room, all with a light touch of Art Deco, the new type of art introduced by the Île de France in 1927. On July 1, 1936, the Queen Mary set out on her maiden voyage. But as a touch of fate, the Queen Mary was surrounded by fog after two thirds of the voyage.

As soon as the fog had lifted, the Queen Mary pushed her engines to the fullest, averaging 32 knots for the rest of the voyage. When she arrived in New York she had completed the voyage in four days, twelve hours and twenty minutes.

The Normandie had been 38 minutes faster. But considering that the Queen Mary had carried through a distance of her voyage at a very slow speed, the British knew that the Blue Riband soon would be theirs. A Larger Queen Mary Model & other Ocean Liners Are Available. 100% hand built from scratch using "plank on bulkhead" construction method. Included with this expert level boat model is a solid wood base with a brass name plate. Size: 32" overall length x 10.5" height x 4.5 width (80cm L x 12cm W x 26cm H). Undreds of hours where required to finish this model boat. Completed model contains thousands of details created by skillful master craftsmen.

Made of finest wood like Rosewood, Mahogany, Teak and other exotic tropical wood. Chrome and brass fittings and ornaments constitute the excellence of this model. Extensive research through original plans and pictures make this model authentic. This model went through a demanding quality control process before leaving the workshop.

After that the item will be re listed. Models are securely packed with foam sheets, peanuts or bubble wraps. This item was in stock at the time of listing. This will assure that your message will be received. Auctiva Offers Free Image Hosting and Editing. This item is in the category "Collectibles\Transportation\Boats & Ships\Cruise Ships & Ocean Liners\Cunard".jimscar-go" and is located in this country: US. This item can be shipped to United States, all countries in Europe, all countries in continental Asia, Mexico.