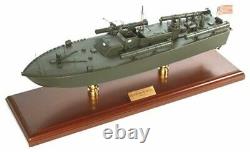 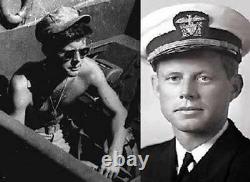 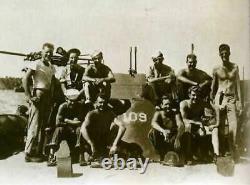 This handcrafted ELCO PT-109 Torpedo Boat model, in 1/40 scale, is painstakingly built by our skilled craftsmen with a wealth of detail. The PT-109 was a PT boat (Patrol Torpedo Boat) last commanded by Lieutenant, junior grade (LTJG) John F. Kennedy (later President of the United States) in the Pacific Theater during World War II. Kennedy's actions to save his surviving crew after the sinking of the PT-109 made him a war hero, which proved helpful in his political career. The only completely restored Elco PT-boat in existence, PT 617, is on display at the Battleship Cove Museum in Fall River, Massachusetts.

Kennedy, an Elco PT-103 class torpedo boat. During World War II, The Elco boats were the largest PT boats operated by the United States Navy. At 80 feet (24 m) and 40 tons, they had strong wooden hulls of 2-inch (5 cm) mahogany planking. Powered by three 12-cylinder 1,500hp (1100 kW) Packard gasoline engines (one per propeller shaft), their designed top speed was 41 knots (76 km/h). For space and weight-distribution reasons, the center engine was mounted with the output end facing forward, with power transmitted to the propeller shaft through a V-drive gearbox.

Because the center propeller was deeper, it left less of awake and was preferred by skippers for low-wake loitering. The engines were fitted with mufflers in the stern to direct the exhaust under water, which had to be bypassed for high speed.

These were used not only to mask their own noise from the enemy but to be able to hear enemy aircraft, which were rarely detected overhead before dropping their bombs. Listing and template services provided by inkFrog. The item "US Navy Torpedo Boat PT-109 John F Kennedy 24 Wood Model Ship Assembled" is in sale since Tuesday, August 30, 2016. This item is in the category "Collectibles\Transportation\Boats & Ships\Military\Models". The seller is "atlantisgift" and is located in New York.