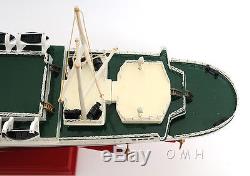 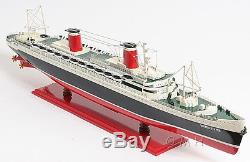 This high quality, highly detailed, expert level, United States Ocean Liner model is brand new, fully assembled and ready for display (not a kit). The task required skillful craftsmen hundreds of hours to accomplish. The SS United States (also known as "The Big U") is an ocean liner built in 1952 for the United States Lines.

The United States lost the eastbound record in 1990, but still holds the westbound record, and remains the fastest ocean liner to cross in either direction. The United States plied the transatlantic with passenger service until 1969, and she outlasted the demise of her original owners. The model measures 32 long from bow to stern. It's a beautiful model ocean liner that will be a conversation piece for any room or office. 32" overall length x 9" height x 4 width.

Ready to display, not from any sort of kit. Made of finest exotic tropical wood.

Figurehead, cannons, anchors, bell, propeller and other fitting made from metal and/or brass. Solid wood base and brass nameplate included.

Missing and loose parts are not considered damaged or defected. We will send you extra parts with instruction.

The actual items colors may vary from colors shown on your monitor. Listing pictures were taken from prototypes. Item(s) in stock might slightly different from the listing pictures.

This item is in the category "Collectibles\Transportation\Boats & Ships\Cruise Ships & Ocean Liners\Other Cruise Ship Collectibles". The seller is "atlantisgift" and is located in New York. This item can be shipped to United States.