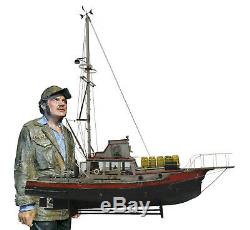 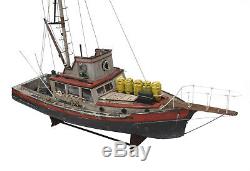 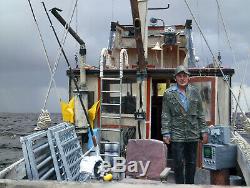 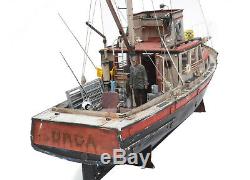 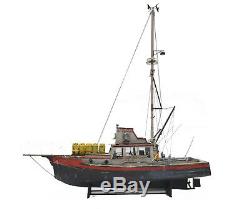 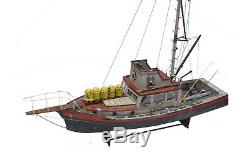 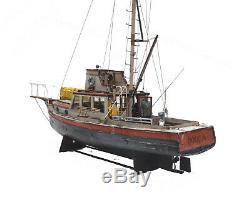 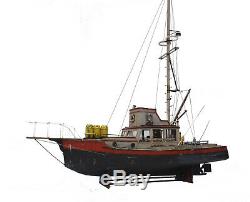 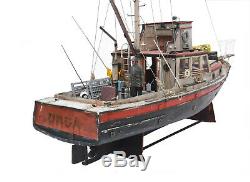 Please message me if that interests you and we can work out the details. Just wanted to point that out, so someone didnt think Quint was giant in relation to the Orca. DESCRIPTION: I will say, that if youve ever wanted to own an accurate Orca model, complete with a dead on accurate Quint to go with it, THIS IS THE ONE! It isnt often that an opportunity to own an Orca replica presents itself, and there hasnt been many as accurate or as detailed as this one offered. Please view the black and white photo, with this Orca model inserted over the real screen used Orca and see how close they match up. This model perfectly overlaps the real boat, so that the real boat is not visible in the photo! Thats how close this model is to the real thing! Thats about 1/6 the price it cost me to build it. Not to mention the countless hours spent. Special attention was paid to getting everything correct, so the boat and all the details, inside and out, would capture the boat seen on film. A run down of the details featured on this Orca and Quint: QUINT: As mentioned above, Quint was sculpted by professional sculptor Palmer Murphy. He did production art for TVland. He was retained by HBO to sculpt a bronze memorial plaque commemorating six firefighters from Ladder Ten killed in the 9/11 attack. He was also the subject of a documentary on sports channel MSG network and was interviewed on Fox and Friends by Fox TV Channel.

Palmer's work has been on view at the National Baseball Hall of Fame in Cooperstown and the Babe Ruth Museum in Baltimore.. Palmer did an amazing job on this Quint sculpt. Truly amazing work and Im honored he contacted me about combining our projects into one amazing 1:14 scale piece of art! Quint is posed in the exact position he was on film, right after Brody said "your gonna need a bigger boat" and Quint stepped out of the Orcas cabin, and walked out to the stern.

Palmer captured everything perfectly, from the clothing (detailed right down to the laces on his coat and shoes), hand position, to the concerned/focused expression on his face while seeing the shark for the first time! CABIN: The cabin on this Orca was also recreated front, back, side to side, up and down, to exact precision.

Wherever possible I would actually print out photo's of the real Orca and simply trace the real boats cabin structure directly onto the wood, thus insuring this Orca would look like the boat seen on film and take the guess work out of it. The cabin even has the slight inward taper toward the top, just as the real boat had! So no guesswork, no human error. Just perfectly replicated Orca parts that look as if they came straight from the film!

All the details have been faithfully replicated, right down to the nails that hold the hull plates in place, to the tiniest of things, such as the hinge plate on top of the spot light, to the tiny knobs on the interior galley lamp, to the ever so tiny eyelets on the fishing pole, etc, etc.. Sticker on the port side of the hull, to the skylight (AKA:Deck Prism) on the cabin roof.. Some of the these lesser known details also include, the blue rag draping off the shark cage float, the wire from the galley lamp hanging across the port side cabin window, the tiny latch hanging from the interior instrument console, the padlock on the interior forward door, etc, etc.... Another detail that is really neat, but does not show up in the photos well due to the white back drop I used, is the wrapped / braided rope around the pulpit railing, ladder handles and barrel runners. They are wrapped with tiny ropes hundreds of times and then re wrapped with a slightly thicker rope in sections to give it that realistic braided look that these area's had in the movie.

Very time consuming, but worth it! And, one of the neatest details on the Orca is the shark jaw on the front of the flybridge! Its been perfectly replicated right down to the tiny teeth and jaw bone detail!

PAINT: This is what really sets this boat off IMO. Sadly the pics only capture a fraction of what the paint actually looks like. The paint on this Orca was done up with several layers of "washes" which gives the boat an ultra realistic, aged & dirty look. The dirt and stains appear as if they have been there for years and have dripped, soaked in and faded over time. The seagull poop appears as if its been there for months and has faded from the salt air, wind and rain.

The blood on the transom from the chum bucket is faded, yet soaked into the paint, which makes it appear as though it has accumulated over the years without ever being washed clean. Areas of the boat that wouldnt have the heaviest foot traffic in real life, are dirtier and more warn than other area's, adding to the realism. The paint is detailed right down to the traces of the faded blue waterline, that was present when the Orca was still the "Warlock". This was also visible on film in a few shots, but really hard to see. There is also tiny dried white specs all over the hull, that depicts dried salt water spray..

I also painted many of the parts with a special paint that has real iron dust in the paint and then added a salt solution which causes the paint to rust! I added a special clear coat over these areas to prevent further rusting. The boat will be insured for 100% full value (except to some international countries). Boat will be well packed and double boxed.

The seller is "november-13" and is located in Port Orchard, Washington. This item can be shipped to United States, all countries in Europe, Canada, Australia.