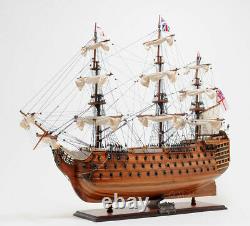 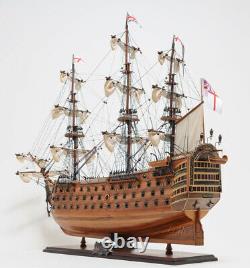 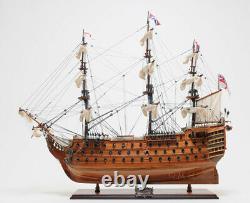 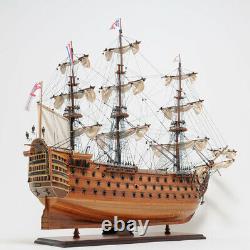 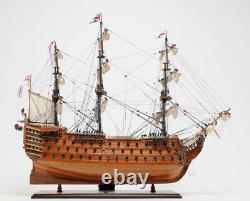 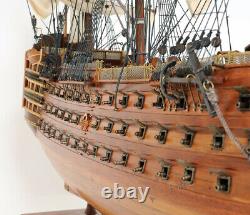 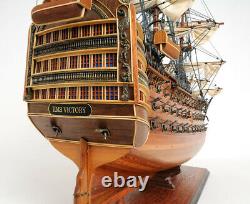 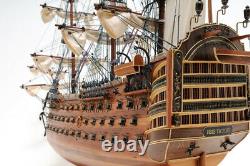 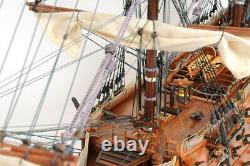 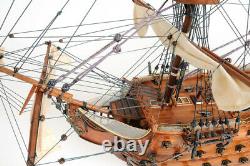 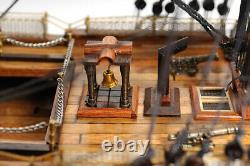 This HMS Victory Model was specially designed & built by the plank on bulkhead method (joining multiple small pieces of wood like Rosewood, Mahogany, Teak and other exotic tropical wood together on the hull). The sailboat model is built exactly to scale as the original Lord Nelson's Flagship the HMS Victory was with many details. The task required skillful craftsmen hundreds of hours to accomplish. The HMS Victory model measures 37 long from bow to stern. This magnificent & historic warship model is sure to become a treasured family heirloom.

Size: 37" overall L x 36" H x 12 W. Lord Nelson's HMS Victory. Displaced over 3500 tons, and measured 226 feet in length and 51 feet abeam. Her hull was sheathed in copper to guard against barnacles. In a stiff breeze, she would billow 36 sails totaling four acres of canvas, and plough the waves at 10 knots.

In weather fair or foul, the Victory was a fortress stocked with 35 tons of powder and 120 tons of shot. She possessed the capacity and endurance to remain at sea for up to six months at a time. Commissioned in 1778, the H. Victory had almost 30 years of embattled service at the time of Trafalgar.

She is a veteran of many hard-won naval confrontations. On October 12, 1805, one of the most momentous battles in European history broke out off the coast of Cape Trafalgar, Spain. The combined fleets of France and Spain led by Napoleon the Great invaded England as a massive and powerful navy. They were thwarted by the supremacy of British sea power. The Victory has maintained a name for herself ever since. The momentous Battle of Trafalgar began on Oct. During this battle, the HMS Victory, led by Lord Nelson, defeated the invading French Armada led by Napoleon the Great. During the Battle of Trafalgar, the HMS Victory sailed directly into the midst of the French Armada and divided in two.

Rudder destroyed, sails full of holes, and with an injured mast, the HMS Victory came straight on, cannons ablaze. As the HMS Victory lacerated the enemy's line, she took great punishment, but her retribution was greater and the HMS Victory left destruction in its wake. Suffering mortal wounds, Lord Nelson flying his famous signal "England expects that every man will do his duty", led the British to one of the greatest victories in nautical history. The HMS Victory is the sole surviving 18th Century warship left on the face of the planet, and is revered as one of the most prominent and decorated of all warships. Honored and preserved over the years, she rests now at Portsmouth, England, a never-to-be-forgotten symbol of loyalty, courage, and devotion to duty.

Chrome and brass fittings and ornaments constitute the excellence of this model. Extensive research through original plans and pictures make this model authentic.

This model went through a demanding quality control process before leaving the workshop. After that the item will be re listed. Models are securely packed with foam sheets, peanuts or bubble wraps. This item was in stock at the time of listing.

This will assure that your message will be received. Auctiva Offers Free Image Hosting and Editing. This item is in the category "Collectibles\Transportation\Boats & Ships\Sail-Powered".jimscar-go" and is located in this country: US. This item can be shipped to United States, all countries in Europe, all countries in continental Asia, Mexico.