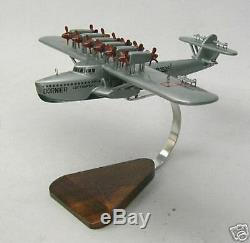 Which has a production period of 1 month. If not, since we have our own factory, we can make one for you in a month.

It is 9.20" in Length, with 11.00" Wingspan, weighing 0.44 pounds, and a package weight of about 2.20 pounds. The picture shown in this listing is part of a set of photos we are using as reference for the production of the models. Each model comes with a wooden stand. Direct from our highly gifted Craftsmen & Artists, Each model is Individually Sculptured and Painted by hand, Not Mass-produced and there is No Reserve! ABOUT US: MyAsianArt is an Art & Antiques Gallery based in Manila, Philippines promoting historical items & featuring local skilled artisans and painters specializing in high quality ARTWORKS (HAND-PAINTED Oil Paintings and Sculptures), model ships, model planes & toy models and Handicrafts from Asia.

We have been doing business WORLDWIDE for more that 8 years. Brief Info: The Dornier Do X was a German flying boat that was the largest, heaviest and most powerful aircraft in the world when it was produced. It was conceived by Dr. It was financed by the German Transport Ministry and was manufactured in a specially designed plant at Altenrhein, on the Swiss portion of Lake Constance, in order to avoid the Allied Commission, which forbade aircraft to be built in Germany.

On 21 October, the plane took flight carrying 169 people consisting of 150 passengers, 10 crew and 9 stowaways, easily breaking the world record for the number of people aboard an airplane a record that would not be tested for 15 years. Weighing 48 tons, the plane taxied for 50 seconds before slowly ascending to only 650 feet. It flew for 40 minutes at a maximum speed of 105 mph and finally landed on Lake Constance. The luxurious accommodations eventually provided on the Do X approached the standards of transatlantic liners.

On the main deck were a smoking room with its own wet bar, a dining salon, and seating for 66 passengers, whose seats could be converted to sleeping berths for anticipated night flights. Aft of the passenger spaces were an all-electric galley, lavatories, and cargo hold. The cockpit, navigational office, engine control and radio rooms could be found on the upper deck. The lower deck held fuel tanks and 9 watertight compartments, any 7 of which could provide full flotation if undamaged.

The giant flying boat had a wingspan of 157' 5", a length of 134' 2" and a height of 33'. The plane had an all-duralumin hull with wings comprised of a steel-reinforced duralumin framework covered in heavy linen fabric, doped with aluminum paint. Powered by twelve 525 horsepower Siemens Jupiter radial engines (6 tractor propellers and 6 pushers), mounted in six tower nacelles on the wing, the plane was designed to carry 66 passengers on long distances or 100 on short trips. The air-cooled Jupiter engines were prone to overheating, and only able to lift the plane to an altitude of 1,400 feet, preventing it from making trans-Atlantic crossings. After completing 103 flights in 1930, the Do X was refitted with water-cooled Curtiss Conqueror 12-cylinder inline engines of 610 horsepower each.

On the 4 August 1930 flight, newly fitted with the Curtiss engines, the plane reached 1,650 feet, a height that was deemed suitable to cross the Atlantic. The Do X took off from Friedrichshafen, Germany on 3 November 1930, commencing a transatlantic test flight.

The route took the Do X to the Netherlands, England, France, Spain, and Portugal. The journey was interrupted at Lisbon on 29 November 1930, when a tarpaulin contacted a hot exhaust pipe and started a fire that consumed most of the portside wing. After sitting in Lisbon harbor for six weeks while new parts were fabricated and the damage repaired, the flying boat continued (with several further mishaps and delays) along the Western African coast, across the Atlantic to South America (where the crew were greeted as heroes by the local German emigré communities), and north to the United States, finally reaching New York on 27 August 1931. Here the plane and crew spent the next nine months as the Do X's engines were overhauled, and thousands of sightseers made the trip to Glenn Curtiss Airport (now LaGuardia) to tour the leviathan of the air.

The return trip began on 21 May 1932 from New York to Newfoundland, on to the Azores, and finally to Berlin on 24 May, where the Do X was met by a cheering crowd of 200,000. Only three Do Xs were constructed, the original operated by Dornier itself, and two others machines based on orders from Italy - the X2 (Umberto Maddalena) and X3(Alessandro Guidoni). The Italian variants were essentially identical to the original with the exception of the powerplant and engine mounts. Each craft was powered by FIAT A-22R (V-12 water-cooled) engines, with the six motor mounts being covered by a streamlined fairing.

Both plane orders originated with SANA an Italian airline, but the aircraft were requisitioned and used by the Italian Air Force primarily for prestige flights and public spectacles. After plans for a first-class passenger service were deemed to be unfeasible, the X2 and X3 quietly vanished; no evidence exists of their fate, but presumably, they were quietly broken up for scrap, probably around 1935. Germany's original Do X was turned over to Lufthansa, the national airline, after the financially strapped Dornier Company could no longer operate it.

After a successful 1932 tour of German coastal cities, Lufthansa planned a Do X flight to Vienna, Budapest, and Istanbul for 1933. The voyage ended nine days out when the plane's tail section tore off during a botched landing on a lake - Stausee - near the city of Passau. The plane was repaired and, after a few more flights, was flown to Berlin in 1934, where it became the centerpiece of Germany's new aviation museum. It remained on exhibit until being destroyed in a RAF air raid during World War II in late-November 1943.

While never a commercial success, the Dornier Do X was the largest plane of its day, a pioneer in demonstrating the potential of international passenger air service and one of the most impressive aircraft of all time. A successor model, the Do-XX, was envisioned by Dornier but was never advanced beyond the design study stage. After purchasing, pay instantly through! Payments are preferred because they are SAFE & SECURE. We are a Premier Merchant, both Verified and Confirmed. The item "Do-X Flying Boat Dornier Airplane Desktop Wood Model Regular Free Shipping" is in sale since Wednesday, September 1, 2010. This item is in the category "Collectibles\Transportation\Aviation\Military Aircraft\Desk & Shelf Models". The seller is "myasianart" and is located in Manila. This item can be shipped worldwide.