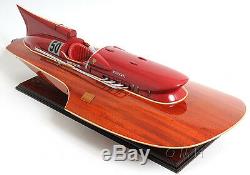 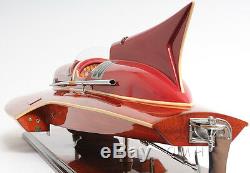 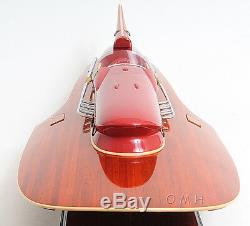 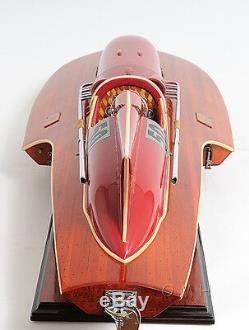 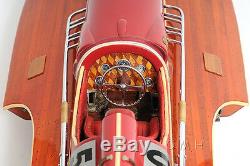 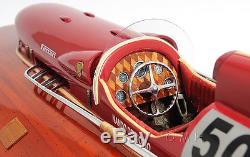 This museum quality, highly detailed, modern style, power boat model is brand new, fully assembled and ready for display (not a kit). The Ferrari Hydroplane model is handcrafted from beautiful wood and along with various other exotic wood. The hull is constructed using a plank on bulkhead method, each strip of exotic wood are carefully joined together to form a smooth hull.

This model is completely hand built to spec by skillful and creative master craftsmen. On the Ferrari Hydroplane, you will find a variety of beautiful handcrafted metal parts such as: metal gauges, metal steering wheel, metal propeller and much more. Including gorgeous chrome exhaust pipes and detailed stiched leather seats.

A wooden stand comes standard with this model. The 1953 Ferrari Hydroplane was built for Achille Castoldi (a wealthy boat privateer) by Cantieri Timossi a hydroplane builder on Lake Como, near Milan. The engine supplied by Ferrari was a type 375 V12 Grand Prix engine developing 385 BHP. In January 1953 Castoldi drove the Hydroplane dubbed "Arno XI" to an unofficial top speed of over 124 MPH.

Attempting to break the speed record set by his rival Mario Verga, Castoldi installed a new engine with twin superchargers. Burning methanol this new Ferrari engine produced close to 600 BHP. In October 1953 Castoldi set a new 800 kg speed record with an average flying kilometer 2-way speed of over 150 MPH! The speed boat has since been restored in the 1990s and was recently photographed flying across the water in September 2004. The model was built according to scale through original plans, pictures, and drawings. We absolutely use no plastic parts only the highest quality wood and metal parts. This model measures 32 long from bow to stern. L: 32 W: 12.5 H: 10 Inches. Ready to display, not from any sort of kit. Made of finest exotic tropical wood. Hundreds of hours were required to finish this model sailboat by skillful craftsmen and artisans.

Solid wood base and brass nameplate included. Missing and loose parts are not considered damaged or defected.

We will send you extra parts with instruction. The actual items colors may vary from colors shown on your monitor. Listing pictures were taken from prototypes. Item(s) in stock might slightly different from the listing pictures. There are no two models looks identical.