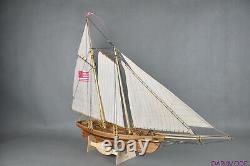 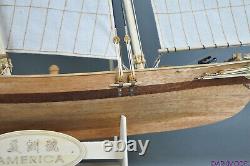 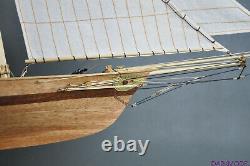 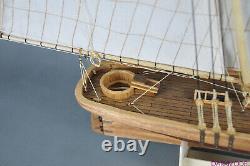 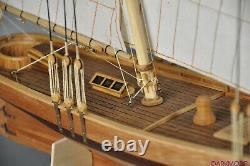 I hope you can find your favorite assembly models here. Time will be much faster than expected. Assembly models fans is big family. Welcome to communicate with me. Widht 115 mm 4.5.

NOTE: THIS MODEL KIT, NOT FINISH PRODUCT. Such as: Finish masts, finish sails made by sewing, etc. All provide great convenience for maker, allowing fans to experience the fun of making. The kit is equipped with detailed material and full-color production manual, making it easy for beginner. London was hosting "The Great Exhibition" (worlds fair) in 1851.

As The Times newspaper put it. America was rigged with cotton sails. The use of cotton sails was not a new idea, but the sails that America went up against were mostly made of flax, flax had a practical advantage over cotton. Flax was lighter, stronger, and did not mildew and rot the way cotton does. Cotton sails needed to be kept dry, especially when stowed.

The America's Cup is the most famous and most prestigious regatta in the sport of sailing, and the oldest active trophy in international sport, predating the FA Cup by two decades and the Modern Olympics by 45 years. The sport attracts top sailors and yacht designers because of its long history and prestige as the "Holy Grail" of yachting. Although the most salient aspect of the regatta is its yacht races, it is also a test of boat design, sail design, fundraising, and managing people.

The cup, originally offered as the Royal Yacht Squadron cup, is now named after the first yacht to win the trophy, the schooner America. The regatta's origins date back to August 22, 1851 when the 30.86 m schooner-yacht America, owned by a syndicate that represented the New York Yacht Club, raced 15 yachts representing the Royal Yacht Squadron around the Isle of Wight.

America won by 20 minutes. Apocryphally, Queen Victoria asked who was second; the answer famously was: There is no second, your Majesty. What they did with the trophy instead laid the foundation for what has become the longest contested trophy in international sport. The crew donated their trophy to the New York Yacht Club, under the condition that the cup "be preserved as a perpetual Challenge Cup for friendly competition between foreign countries, " and the America's Cup race was born. From 1870, the next time the race was held, until 1980, American yachts won the America's Cup race 24 times without a loss (the race is held irregularly).

The Australian yacht Australia II finally took the cup when it won the race in 1983. Although Americans regained the cup in the next race (in 1987), non-American challengers have won the cup three times since 1983. New Zealand just became the first non-American club to successfully defend the Cup with its victory in America's Cup 2000. 2, If you want to get it early, please visit our store! If you do not receive your package within the deadline, pls contact the us.

We will try my best to help you, Pls do not leave a negtive feedback, we can help you to resolve any problem. We believe our items are so outstanding. All products are quality checked.

We will be happy to resolve any issues you may have in a cordial and friendly manner. We appreciate your Postive Feedback, and will do the same in return. This item is in the category "Toys & Hobbies\Models & Kits\Boats & Ships".

The seller is "darkside929" and is located in this country: CN. This item can be shipped worldwide.