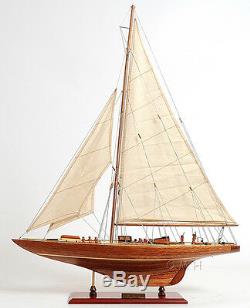 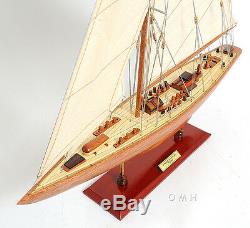 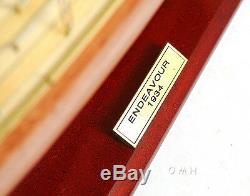 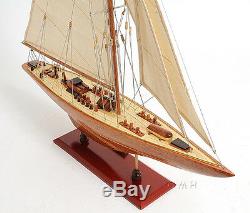 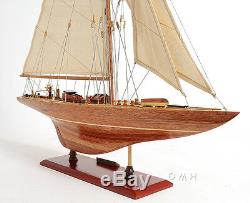 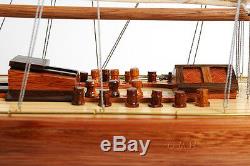 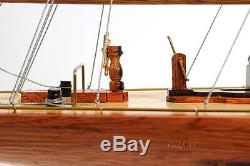 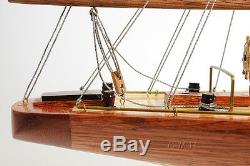 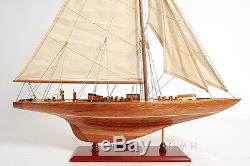 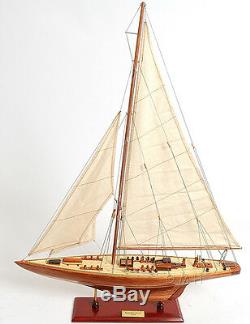 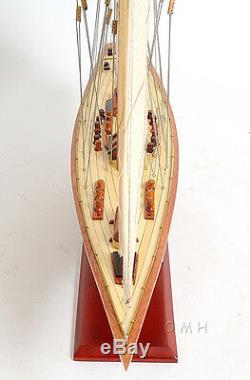 America's Cup 1933 Endeavour The J Class Boat Assembled Large 60 Built Handmade Wood Model. This high quality, highly detailed, intermediate level, Endeavour J Class yacht model is brand new, fully assembled and ready for display (not a kit). This item requires some semi-assembly you will need to raise up the mast (a moderate skill level is required). This America's Cup Yacht Model was specially designed & built by the plank on bulkhead method (joining multiple small pieces of wood like exotic tropical wood together on the hull).

The sailboat model is built exactly to scale as the original Endeavour was with many details. The task required skillful craftsmen hundreds of hours to accomplish. The Endeavour was hailed as the most beautiful J-Class yacht ever built. She was the best and most impressive sailboat that Britain ever built to race in Americas Cup series. Endeavour had speed as well as beauty.

Sopwith, the undisputed leader of the British aircraft industry, Endeavour possessed many new and innovative devices, including below-deck winches, new sail designs, and an improved spinnaker. Even with an amateur crew, she came close to winning the Cup than any other challenger up to that time. Endeavour was a faster yacht than her contender Rainbow.

She beat Rainbow the first two races. However, the American team was a much finer crew and defeated Endeavour all next three races by out-thinking her captain.

In the third race, as a direct result of Vanderbilt, the skipper of "Rainbow", failing to pull away, the yachts almost collided when Endeavour had right of way. Sopwith raised the protest flag after the race in accordance with British rules. The race committee, however, dismissed the protest as the American rules stated the protest flag is to be flown at the time of the foul.

This prompted a British writer to comment, Britannia rules the waves, but America waives the rules. Saved by Elizabeth Meyer of New Port, RI, today she is one of the most breathtaking sights on the water. To take the helm of such a yacht is to experience pure power, grace, and speed. L: 60" x W x 10.8 H x 72" Inches.

Individual wooden planks used in hull construction using plank on bulkhead method. Highly complex rigging with varied thread gauge, hundreds of blocks and deadeyes. Figurehead, cannons, anchors, bell, propeller and other fitting made from metal and/or brass. Solid wood base and brass nameplate included. The actual items colors may vary from colors shown on your monitor.

Listing pictures were taken from prototypes. Item(s) in stock might slightly different from the listing pictures. There are no two models looks identical. The item "America's Cup 1933 Endeavour J Class Boat 60 Built Wood Model Yacht Assembled" is in sale since Thursday, December 13, 2018. This item is in the category "Toys & Hobbies\Models & Kits\Boats, Ships\Wooden".